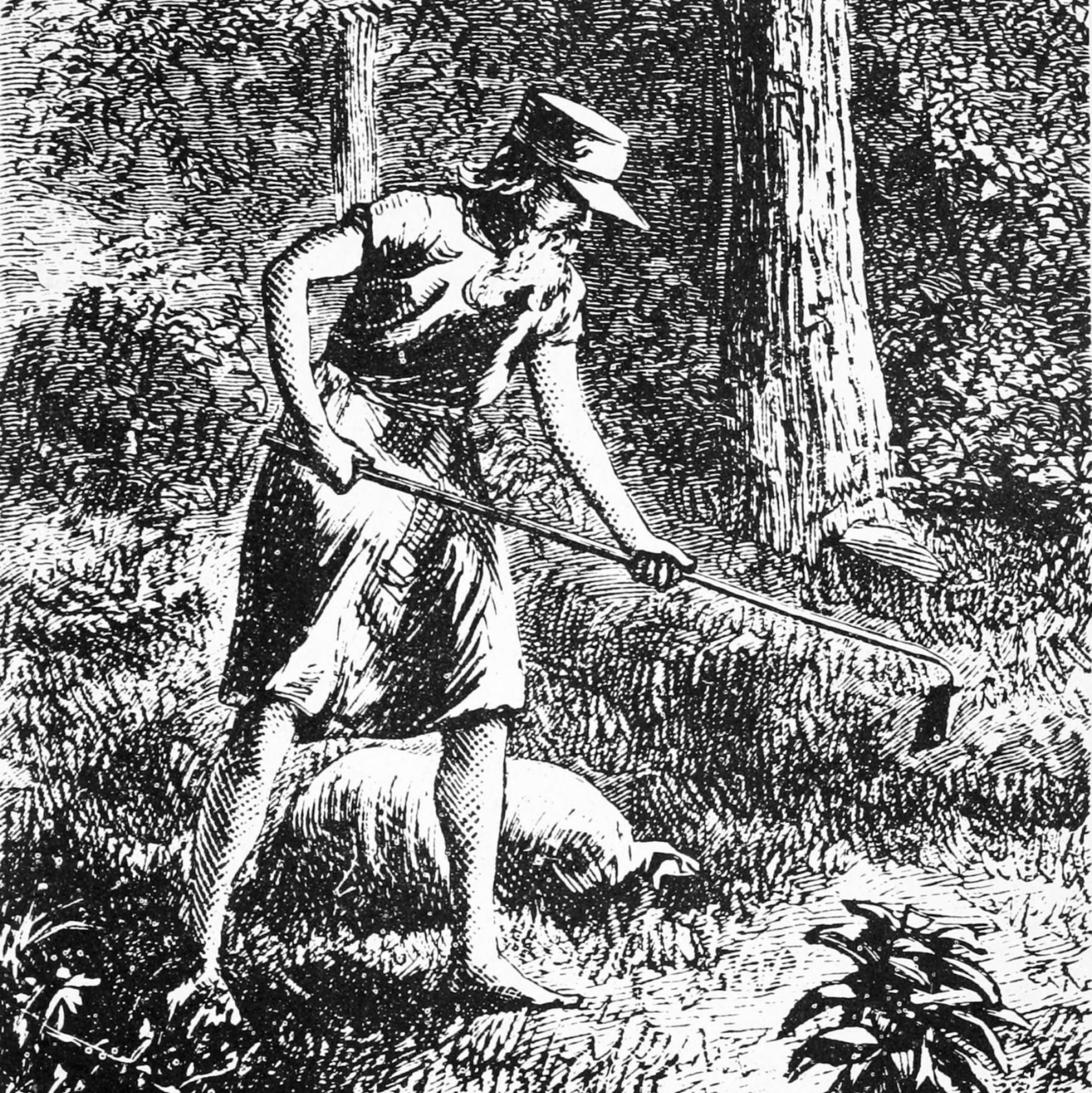 John Chapman (1774-1845), known as Johnny Appleseed is connected to the history of American brandy distilling

Johnny Appleseed introduced apple trees to large parts of Pennsylvania, Ohio, Indiana, Illinois and Ontario, and West Virginia. He planted hundreds of thousands of apple trees along the frontier to support new settlements. And, most of his apple trees weren’t for eating, they were ideal for making cider and apple brandy…

The only apples native to North America are crab apples, therefore, early settlers brought different varieties of apple seedlings from Europe to the new continent. The first apple orchard on the North American continent was planted in Boston by Reverend William Blaxton in 1625.

John Chapman was a missionary for the New Church (Swedenborgian), and he believed that apple tree grafting was “unnatural” and hurting the trees. So, most of his orchards were planted from seed with mainly “wild apple” tree varieties, so called “spitters” that are often sour and bitter in their taste thus ideal for brandy making. As most apple trees don’t come true to seed and cuttings don’t root easily, the technique of grafting was developed in China about 2000 B.C.  joining a piece of vegetative wood (the scion) from a tree one wishes to propagate to a rootstock creating a “clone” of the desired apple tree.

In the 17th century sour and bitter apple varieties were common and used for baking, cooking, as well as for making cider and distilling apple brandy. Alcoholic beverages were still primarily consumed as “food” (it was a form to preserve fruits that otherwise would have gone bad), and for medicinal reasons to be mixed with water to reduce risk of getting ill of bacteria (Bacteria though were first observed by the Dutch microscopist Antonie van Leeuwenhoek in 1676; though mixing water and wines or beer was a common drink throughout Europe in the Medieval Period known to be “healthy” drinks as an add on to ones diet).

When in 1792, Congress gave 100-acre lots to men who settled on the land to buffer Ohio Company lands against Indians territories, John Chapman came up with his business idea – to claim as many properties as possible and to convert them into orchards for later sale. As apple cider was one of the most commonly drinks of that time in North America (according to Smithonian magazine settlers on the frontier drank 10.52 ounces of hard cider per day which was about half of their daily liquid intake), so John Chapman’s business idea was appealing to many and soon history nicknamed him Johnny Appleseed – the father of many American Orchards. He planted hundred of thousands of unique trees as he religiously objected grafting, and sadly most of them were destroyed during prohibition period. One reason may have been prohibition itself causing a refocusing on sweeter apple varieties for direct consumer consumption over bitter and sour apples that were mainly used for baking and alcohol production. It is though most likely a myth that FBI agents cut down orchards out of fear of local cider production.

Today, only one tree planted by Johnny Appleseed may have survived on the farm of Richard and Phyllis Algeo of Nova, Ohio. It may be an original “Rambo apple” tree variety. In 1905 American orchards grew about 14,000 unique apple varieties, and most of them were in Appalachia. Experts estimate that about 11,000 heirloom varieties had gone extinct since prohibition. Some “apple hunters” like Tom Brown of Clemmons, North Carolina, are recovering as many original American apple varieties as they can find, bringing back not only delicious apples but apple by apple American brandy distilling culture.